There’s also some kind of contest type thing happening.  I had a bit of trouble choosing a prize for this one because most of the things Kate likes (booze, cigarettes, knives, women) are illegal to ship internationally. I thought about a fedora, but then I remembered people had differently shaped heads and there was no point sending somebody an item of clothing they wouldn’t be able to wear. So, basically, that leaves coffee and Bovril and nobody likes Bovril except people from the North East of England. I’m therefore going offer 250g of Jamaican Blue Mountain, the nicest coffee in the known universe, purchased from a wonderful speciality shop, ground or beaned to your specification. If you don’t like coffee, I’ll replace it with an equivalently lovely tea. And if you really want to try the Bovril, I could probably be persuaded to throw that in as well.

If you’d like win this distressingly perishable souvenir please answer the three questions below (clues in the book) and drop me an email. I’ll announce the winner a handful of days after the end of the tour.

The Boys Want to Be Her

One of the things I have most difficulty with in all of my writing, but in the Kate Kane books in particular, is gender coding.

There's a basic problem with writing LGBT characters in that because gender and sexuality intersect in difficult and complicated ways, and ways which often run contrary to each other, it can be very hard to challenge stereotypes in one area without reinforcing them in another. Write a gay man who rejects conventional definitions of masculinity, and you're reinforcing the notion that gay men are feminine. Write one who eats nails for breakfast and punches terrorists for a living, and you're reinforcing the notion that being muscular and violent is somehow intrinsically linked with male-ness.

This gets even more problematic when you're a man writing about lesbians, because a lot of people are naturally (and to an extent justifiably) suspicious. This absolutely isn't going to be a post about whether I am Doing Lesbians Right, firstly because it really isn't my call to make, and secondly because I'm not sure it would be a question I could meaningfully engage with even if it was.

The thing is, a big part of what I was trying to do with Iron &Velvet was to genderflip a number of very explicitly (and I would argue very problematically) masculine archetypes. The hard-drinking, emotionally withdrawn PI. The alpha werewolf. The vampire Lothario. King Arthur. Of course the danger of doing that (particularly in f/f) is that you run the risk of making your characters look excessively masculine, and I'm sure some people will think the book has exactly that problem. Still, I'd like to spend the rest of this post rambling about how I feel it all panned out, and some of what I was getting at in the first place.

Let's start with Kate. In some ways, Kate isn't that different from your standard action heroine in an urban fantasy, or even some brands of romantic suspense. There are plenty of heroines in all kinds of genres, after all, who get to kick butt and take names just as well as the boys do. If Kate has masculine-coded traits they aren't her strengths – there are plenty of badass heroines out there – but her flaws. I remember reading a post on an author's blog years ago (so long ago that I can no longer remember the name of her blog or her books) in which the writer explained that while she wasn't a big fan of the Millenium trilogy she thought the character of Lisbeth Salander was important not because she was a Strong Female Character – there are plenty of Strong Female Characters – but because she was a strong female character in a mainstream novel who was genuinely just weird. She went on to point out that while we've come a long way since the days when female characters in books were either damsels in distress or evil seductresses, there are a lot of traits that heroines in fiction still don't tend to have. You get heroines with tragic pasts, but you very seldom get one who is a tormented genius or a jaded maverick on a spiral of self-destruction, or a washed-up drunk one bad night away from the bottom of a river.

Kate was an effort to redress that balance, albeit in a small way. I wanted her to have the kinds of personality flaws that heroines usually aren't allowed. I wanted her to be messed up for reasons that didn't come back to a difficult childhood, to be somebody who drank too much, smoked too much, and had too much meaningless sex. Somebody reckless, self-destructive, and infuriatingly good at what she does.

None of which means she can't also wear a nice frock occasionally.

This has become something of a reference-heavy post, but this whole issue reminds me somewhat of  this photo from the rather wonderful Cambridge Needs Feminism gallery. The sign – for those who haven't clicked the link or are reading on mobile devices and therefore can't get a good picture – reads "I need feminism because my sexuality shouldn't make it less surprising that I study physics."

I really like this image. The sentence is initially hard to parse, because you don't have a great deal of context to work from and it involves a lot of negatives (shouldn't, less, surprising), but it manages to articulate quite a complicated intersectionality issue using only fifteen words and a whiteboard. Assuming I have interpreted things correctly, people are surprised that the person in the picture studies physics, because they consider studying physics to be unfeminine, but less surprised once they find out she is a lesbian because they consider lesbians to be likely to do unfeminine things. The picture concisely articulates the fact that both of these assumptions are simply wrong. In a sense the picture succeeds in resolving the issue I talked about at the start of this post by challenging both the gender and the sexuality stereotype at once.

A lot of the characters in Iron & Velvet have masculine-coded traits. Kate is a hard drinking trainwreck with self-destructive habits and a thing for dangerous women. Julian (who is actually quite girly a lot of the time, despite dressing like a dandy highwayman) has a terrible temper and a vengeful streak a mile wide. Tara has alpha-douchebag characteristics out the wazoo. Nimue is basically all about kingship. Part of what I was trying to do with the book (again in my own small way, I make no claims to be a great revolutionary) was to question why we see these qualities as “masculine” at all. Essentially I was trying to say in eighty thousand words what the student in the picture says in fifteen. These characters' sexualities should not make it less surprising that they possess the qualities they possess.

Alexis Hall was born in the early 1980s and still thinks the 21st century is the future. To this day, he feels cheated that he lived through a fin de siècle but inexplicably failed to drink a single glass of absinthe, dance with a single courtesan, or stay in a single garret. He can neither cook nor sing, but he can handle a seventeenth century smallsword, punts from the proper end, and knows how to hotwire a car. He lives in southeast England, with no cats and no children, and fully intends to keep it that way. 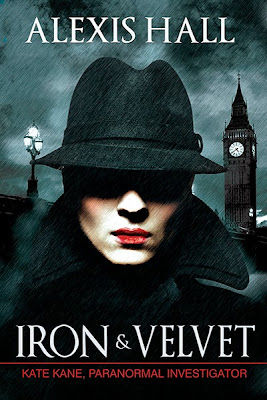 First rule in this line of business: don’t sleep with the client.

My name’s Kate Kane, and when an eight-hundred-year-old vampire prince came to me with a case, I should have told her no. But I’ve always been a sucker for a femme fatale.

It always goes the same way. You move too fast, you get in too deep, and before you know it, someone winds up dead. Last time it was my partner. This time it could be me. Yesterday a werewolf was murdered outside the Velvet, the night-time playground of one of the most powerful vampires in England. Now half the monsters in London are at each other’s throats, and the other half are trying to get in my pants. The Witch Queen will protect her own, the wolves are out for vengeance, and the vampires are out for, y’know, blood.
I’ve got a killer on the loose, a war on the horizon, and a scotch on the rocks. It’s going to be an interesting day.

You can read an excerpt and, y’know, cough, buy the book, if you want, at Riptide Publishing.